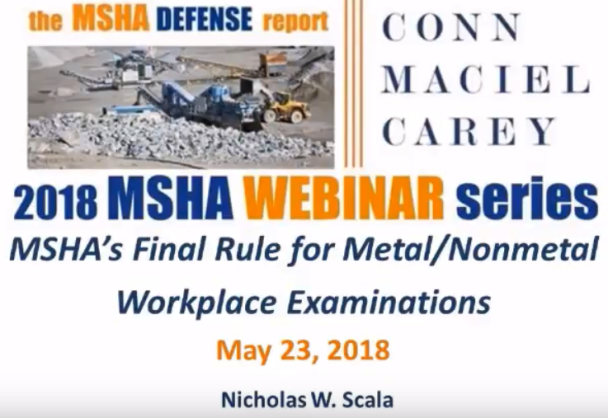 With all the delays, pauses and changes endured since MSHA first released its Final Rule for the Examination of Working Places in Metal/Nonmetal Mines, it is hard to believe that was just in January 2017. While the industry has braced for the rule to go into effect on several different dates since that release, there has been consistent opposition and toe dragging to putting it into action. This webinar reviewed the evolution of the rule since its first proposal, and outline elements that operators, and independent contractors must adhere to when it goes into effect.

During this webinar, participants learned about:

Here is a link to a recording of the webinar with slides and audio. This was the third webinar event in the 2018 Conn Maciel Carey MSHA Webinar Series. Plan to join us for the rest of the webinars in the 2018 series, send an email to info@connmaciel.com to be registered for all the 2018 MSHA webinars.