Bringing a longstanding rulemaking item to fruition, MSHA issued its final rule for workplace examination requirements in Metal/Nonmetal (“M/NM”) mines on April 9th. This rule has been well publicized, and much debated within the industry, but production operators and independent contractors must prepare to comply with its changes as it becomes effective June 2, 2018.

The rule has been an important component of MSHA’s regulatory blueprint since it was first announced in 2016 and this iteration follows up on a January 23, 2017 final rule that amended provisions for examinations in these mines. The rule was previously stayed and delayed on several occasions. (See our previous blog posts for details) 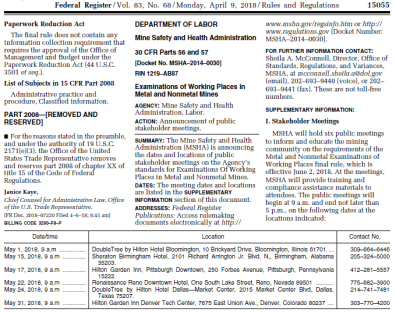 The amendments, which were first announced in Fall 2017, provide operators with additional flexibility in managing safety and health programs and, according to the rule notice in the Federal Register, “reduces regulatory burdens without reducing the protections afforded miners.”

At the same time, MSHA published a document concurrent with the rule providing notice of stakeholder meetings. These conferences are designed to help the mining sector achieve compliance with the exam requirements and to assist with any concerns in the industry about the rule’s final form.

This regulation takes effect on June 2, so there is only a short window to make sure the examinations are conducted in accordance with MSHA’s requirements. However, the National Sand Stone & Gravel Association recently reported that MSHA will not issue citations for alleged violations under new requirements until October 1, 2018, unless egregious conditions are observed (a policy also announced by MSHA at recent stakeholder meetings).

The most notable of the changes, MSHA will now require that a competent person examine each working place at least once each shift before work begins, or as miners begin work in that place, for “conditions that may adversely affect safety or health.”

Further, the rule amends §§ 56.18002(b) and 57.18002(b) to require that the working place examination record includes a description of each condition found that may adversely affect the safety or health of miners and is not corrected promptly.

The agency also made a conforming change amending §§ 56.18002(c) and 57.18002(c) to require that when a condition that may adversely affect the safety or health of miners is not corrected promptly, the examination record shall include, or be supplemented to include, the date of the corrective action.

According to MSHA, even after reviewing comments during the proposed rule stage launched in September 2017, it concluded that the rule will reduce the regulatory burden and increase flexibility for operators without reducing miner protections. Also, MSHA cited consistency with the administration’s initiatives to reduce and control regulatory costs.

Notably, the final rule does not alter longstanding definitions in existing M/NM standards, such as the operator’s authority to designate a competent person to conduct the exam. However, the rule does provide additional clarification on what the Agency intends to constitute a working place, promptly acting, and adverse conditions under the regulation.

Many concerns have been aired over the rule from across the spectrum of the mining sector. According to the Agency, stakeholders commenting on the planned rule “generally indicated that the changes in the proposed rule were improvements to the January 2017 rule,” but several expressed concerns that the proposal did not go far enough in reducing regulatory and cost burdens. Others maintained that the proposal would not increase miner protections, but would increase operators’ administrative and paperwork burdens, the agency noted.

With any new regulation, there will be growing pains once enforcement begins, and the omnipresent concerns with consistency through the inspector ranks remains, but the added compliance assistance grace period allows for operators a few more months to tailor their policies before citations begin in earnest on October 1st.

Metal/Nonmetal employers are well-advised to closely study the changes contained in the rule, as MSHA has signaled that it is serious about enforcing these changes to the standards.

For more information on the evolution of the rule from the initial proposal to final rule and its requirements, register for Conn Maciel Carey’s complimentary webinar on the rule and join us May 23, 2018 at 1:00 pm ET to discuss the changes in detail.